Austin was Named the Best City to Start a Business

Did you know that Austin was named THE BEST city to start a business? Austin tends to attract a lot of people for a lot of different reasons. There is the University of Texas, live music, reasonable cost of living, and the tech boom have been major factors in Austin’s ranking. The up and coming Silicon Valley of the South is here to stay and only get bigger.

Despite the fact that Austin is considered by most to be a “laid back” city, we have been proving otherwise that Austin is getting more and more fast paced. Austin is now growing 4 times faster than nearly all of Silicon Valley. Austin is the new Silicon Valley with all these major tech companies. Google, Facebook, Amazon, and Drop box are all located in Austin and providing a tremendous amount of jobs, stability, and financial security. With all these tech hubs, Austin has been nicknamed the Silicon Valley of the South.

Other cities that followed close behind were, Salt Lake City, Raleigh, Nashville, San Francisco and San Jose. These cities have many things in common, specifically, that they are all major tech hubs. When creating a business there are factors that you don’t even know about. Starting a business in Austin is not only a good idea but the BEST idea.

Austin is projected to grow in business and population for the next few decades. When looking to move to a new home or city, it is important to take into consideration possible threats that will set you back. In the opinion of CRG, the only negative side of living in Austin is wishing you had moved here sooner!

Call or contact Cain Realty Group if you have any questions or reservations about buying or selling a home in the Austin area. 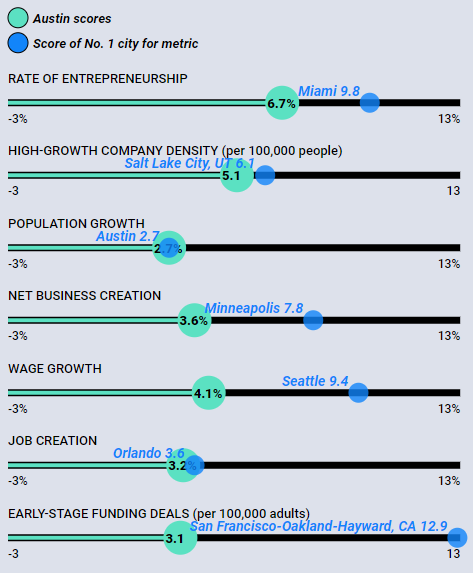