The Bureau of Labor Statistics released their final 2017 metro area job statistics recently and Austinites were not surprised! Austin has been ranked the #2 fastest city for job growth in 2017, by adding 22,200 new jobs with a growth of 2.2%.

WalletHub analysts also conducted a study on the fastest growing cities in the U.S, consisting of the following data: 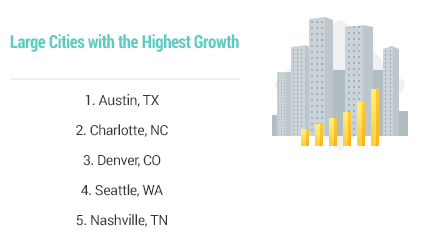 WalletHub then determined each city’s weighted average across all metrics to calculate its total score and used the resulting scores to rank-order the cities. Each city was categorized in the following guidelines:

As Austin continues to grow, so will the job market. If you or someone you know is thinking of relocating to the Austin area please take advantage of our Austin, TX Relocation guide. We would be happy to send you a complimentary guide to help serve you in your new adventure.